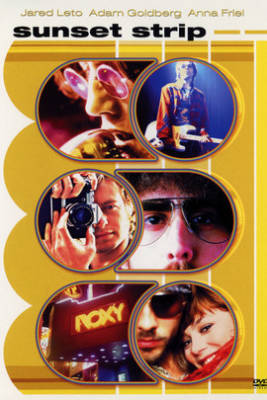 In the year 2000 one more thing happened which was quite interesting. I had been writing/recording/producing “Library Music” cues for a company in LA since the early 90’s, Transition Music. Lots of stuff that was placed in TV primarily. One day my contact there, Jennifer Brown calls me. They need some music “now, like today!”, for a film that is just about complete. The film is being produced by 20th Century Fox. It’s titled “Sunset Strip”. The theme is set in the early 70’s in LA on Sunset Blvd. When the film was started Stuart Copeland was hired as the composer. It fell out of production and Robbie Robertson took over in an executive capacity apparently. The word I got was that it fell out a second time but had been resurrected and when finished it was going to run for a week in theatres and go straight to video.


The movie was complete but they needed four pieces of music. The first was for a scene at the beginning of the film. I was told they needed a Grateful Dead kind of thing. I am not a Deadhead and am totally unfamiliar with their music. I called a buddy of mine who I knew liked them and borrowed one of his Dead CD’s. I suppose I looked it over, did an internet search and found one of the more popular tunes to mimic. In a day I write and record this thing, and send it off to Transition. The 20th Century people love it and ask me to write three more pieces. I do, they take them for the film and then I am told they want to make this “work for hire”.


For those of you unfamiliar with how this works, when anyone writes a piece of music, the writer now owns the writer share and the publishing. This is commonplace in the world of records and lots of TV. Movies are a different animal. Film composers write film scores and get paid quite well as “work for hire”, which means the studio now owns the music as part of the film. The composer gives up any ownership rights to the music, but the hefty paycheck in front makes up for that. I am asked to consider this work for hire, give up my ownership rights, and so I give them the “no way”. I guess since it was pretty incidental stuff they agreed and I retained the writer ownership along with Transition being the publisher.


The movie comes out and I am given a copy of the video. I put the thing in the VCR and in the very beginning of the movie there is a scene in a diner with my “Dead” knockoff song. I’m singing away and a customer who in the movie plays the songwriter is talking to his waitress. They have this interplay about the record coming out of the radio. I put together a short edit of this, intro credits and into the diner scene. Funny stuff, I guess I’m a rock star, hahahaha.

Moving into 2001 through early 2003, while the main gig is still the out of town sessions, the supplemental gig is producing local artists. Some bands and singer/songwriter stuff. I am looking at my session log and it’s just filled with local production projects. Some really cool things and some that one does just to pay the bills. The LA sessions were now pretty scarce, Rosewood sessions in Tyler were still viable but certainly slowing down, but in March of 2003 Greg Hunt at Rosewood calls and books me on a few days work. My recording rig is in LA so I ask Greg when he needs it in Tyler. He tells me not to bother with it. “Just bring a guitar” he says. I fly to Tyler with one of my strats. The first day I have my strat in the control room, a long cable is going from my guitar into a Fender Twin in the tracking room. He opens up ProTools and the digital amp modeling program “amp farm”. We spend a few days doing overdubs on some projects all through amp farm which is like having my rig there. Not quite the same but a lot more cost efficient.


After the last day of work Greg and I are talking. He is giving me a real heads up. The Curb Records sessions are pretty much going away. Leann Rimes has moved to Los Angeles and is doing a pop record with producer Desmond Child. Greg and the Rosewood crew are going back to what they had been doing for years, which meant I may get called once every 1 to 2 years when they had a project with a budget large enough to call players that were not local.


It’s the end of the line folks, I had left LA 7 years prior, had been working with Greg and Curb Records over the last 6 years, the world that Libby and I had created for ourselves and our kids in Massachusetts was in full swing and I now had to figure out how to make a living without the sessions I had been doing for over two decades. But first, it’s time to “downsize”! That evening, after speaking with Greg, and since our work was done, instead of flying home I buy a ticket to LA and head to my cartage company.
Here is my recording rig on tour in ’86 with John Fogerty. It had been somewhat modified from what is pictured here but I dismantled the entire thing, and piece by piece I boxed it all up. There were 28 pieces in all. I headed to the local UPS store and asked if they could ship all of my parcels as I was selling it all on Ebay. I numbered all of the boxes, returned home and each week I would put up 3 or 4 items. When they would sell I would call the UPS store in La Crescenta and say something like, “go pick up boxes 14, 22 and 8 and ship to these addresses”. I did ship home the choice guitars and a few pieces that I could not live without.


On occasion I did still get called to head to LA for sessions but that was pretty rare. On those occasions I just rented gear from Lon Cohen Studio Rentals.
Here is Lon’s website:

It’s now summer in 2003. Over the years of living outside of Boston one thing was clear. Anyone that was a serious working musician locally seemed to have some kind of participation at the Berklee College of Music. I decided to put together a portfolio and knock on the Berklee door. I asked my old LA session friends John Robinson, Abe Laboriel and Michael Thompson if they would write me letters of recommendation. They were all Berklee alumni and graciously they sent me the letters. I cold emailed Ron Savage who chaired the Ensemble dept. Ron sent me an email back and said there might be something in the Fall semester and to contact him again in a few months when that was gearing up.


Next week, starting my new band “Peanut Funker and Jam”.