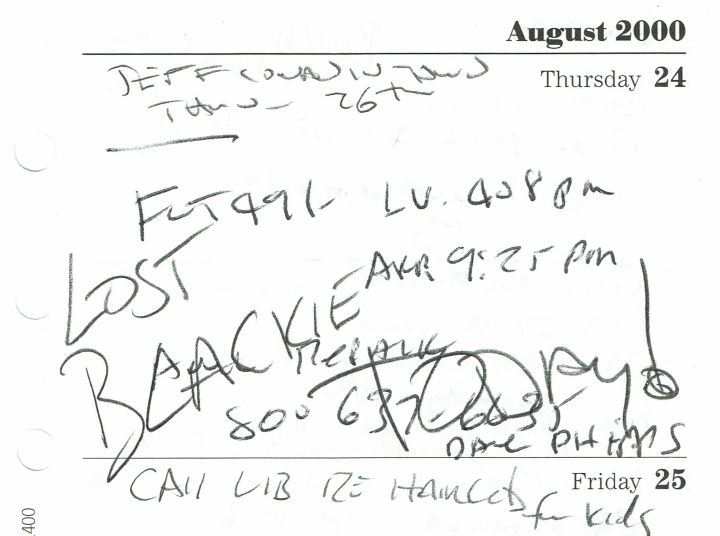 Doing sessions in Los Angeles and Tyler TX from the time I left LA in 1996 until my last Tyler session in 2003 was a bit tricky. My studio gear which I left with my cartage guy Jim Williamson in LA was substantial and had to be trucked back and forth from LA to Tyler and back. There was one exception. My main guitar was a hybrid custom that was built primarily by Valley Arts guitar in Studio City CA., with some substantial upgrades done by James Tyler. My cartage guys at Andy Brauer’s in the early 80’s dubbed it “Blackie” as it was all black. Some of those guys hounded me to sell it to them, the neck that Mike McGuire of Valley Arts put on it was wonderful. It’s still the best neck on any guitar I own.


This could have been called my “Lucille” as it was really the go to guitar for years. Here is a pic of Supertramp at Bercy in Paris, 1986, I have a solo front and center with Blackie. Because Blackie was my “go to” guitar, I had to have it at my home studio and at my sessions so I flew it wherever I went. On Thursday August 24th 2000, I flew to Tyler to do some sessions for Curb artist, Mary Griffin. I checked Blackie in at the American Airlines counter in Boston in an anvil flight case. I arrive in Tyler and my suitcase comes through baggage claim…….no guitar. I’m nervous. I go to the counter and they tell me it must be on a later flight and they will deliver it to the studio. I am working on Friday and Saturday with Greg Hunt and Gary Leach and still no Blackie. I remember at one point I am in the isolation booth playing acoustic guitar. In between takes Mary sees I have my head down, just depressed. She comes in to ask if everything is ok. It’s not, I had a bad feeling about this and I was right.
Here is my date book entry for that day. And a pic of me with Blackie and my Bradshaw rig at Rosewood Studio on a prior session. For you guitar fans notice the “James Tyler” logo on the head stock. At Valley Arts, Mike McGuire and I started this project by replacing parts on another guitar I had. We got so far, then I met James Tyler. I had decided I wanted to replace the body and when I met James he had a black basswood body in his shop that was ordered and never paid for. I had him replace the body with his basswood one, and add the “secret weapon”, a Tyler mid range boost. Without asking me James also replaced the logo! Years later when I needed fret work I took it back to Mike at Valley Arts and had him put the Valley Arts logo back on the headstock.


My sense was the guitar was lifted at Logan airport in Boston. On August 27th I arrived back in Boston and the supervisor at American spent a lot of time with me. We found the guy who checked me in, he told us who it was that took the guitar to baggage. Turns out it was a new guy that had been there two weeks. He then actually walked me through the bowels of baggage handling, thinking maybe it was down there somewhere. It wasn’t. I started a claim with American, made my case for the max insurance payout. $2500. Still no amount of money could really compensate for the loss. Here is my letter to American. Credit to American Air, they gave me the $2500. Mike McGuire who was now at Gibson told me who to contact to buy the parts to rebuild the guitar. I spoke to James Tyler as well and another tech in Michigan, Tim Jagmin, who built one of the pickups. Once I bought all of the parts, my current tech, Pat Diburro of Diburro guitars, (www.diburro.com) put it all together. Quite a nice instrument actually but still the heart is broken over the loss…….but there is more.


It’s now late November. One evening I have voicemail messages on my phone. I dial up voicemail around 6pm or so. The first one is from Pat Diburro. Pat says something like this.


“Hey Marty, it’s Pat Diburro. I am here at Guitar Center in Danvers doing some tech work. Somebody brought in a Vally Arts Strat. It’s not yours but I know you like these guitars. They are selling it for $200. Thought you might want to know”.


Now, interestingly, when my guitar went missing one of the first people I called was Tom Moore who managed the Danvers Guitar Center. I told him about the missing guitar back in August. I immediately call Tom.


Me: Hey Tom, Marty Walsh.
Tom: Hi Marty, what’s up?
Me: Pat Diburro told me you have a Valley Arts Strat that came into the store.
Tom, Let me look it up……Ya, it came in yesterday, what was your serial number?
Me: There was no serial number as it was put together piece by piece.
Tom: There is no serial number on this one.
Me: I’m on my way NOW!


I race down to Guitar Center, Tom’s office is viewable from the store entrance. I can see the strat and it’s not mine. My heart sinks. I walk in and say hello to Tom, and I am looking at the guitar. Wait. What? I look closer, and realize it’s Blackie! Someone changed the pickups and pickguard to disguise it. Unreal! I tell Tom it’s mine. Tom says, “wow it IS your guitar!”


Now the deal is, I had filed a police report when the guitar went missing, but if I go after the guy, presumeably who worked at American Airlines, the police confiscate my guitar and I have to go to trial and “prove” it’s mine. Bad idea. Tom says, “I have to do a mandatory 7 day hold but I’ll sell you the guitar for what I paid for it, $150”. This is a west coast VA Strat. If it was hanging in Guitar Center on Ventura Blvd in the San Fernando Valley it would have been $1500 easy. I hand Tom my credit card, he rings up $150, 7 days later I have Blackie back and I never take it out of the house!


Finally here is a pic of Blackie today. I changed it up a bit with a creme pickguard and the last work that was done on the guitar was by Mike McGuire’s son John who builds custom McGuire guitars in Somerville MA. 
Next week the end of my LA studio musician “presence” and the beginning of my Berklee College of Music career!