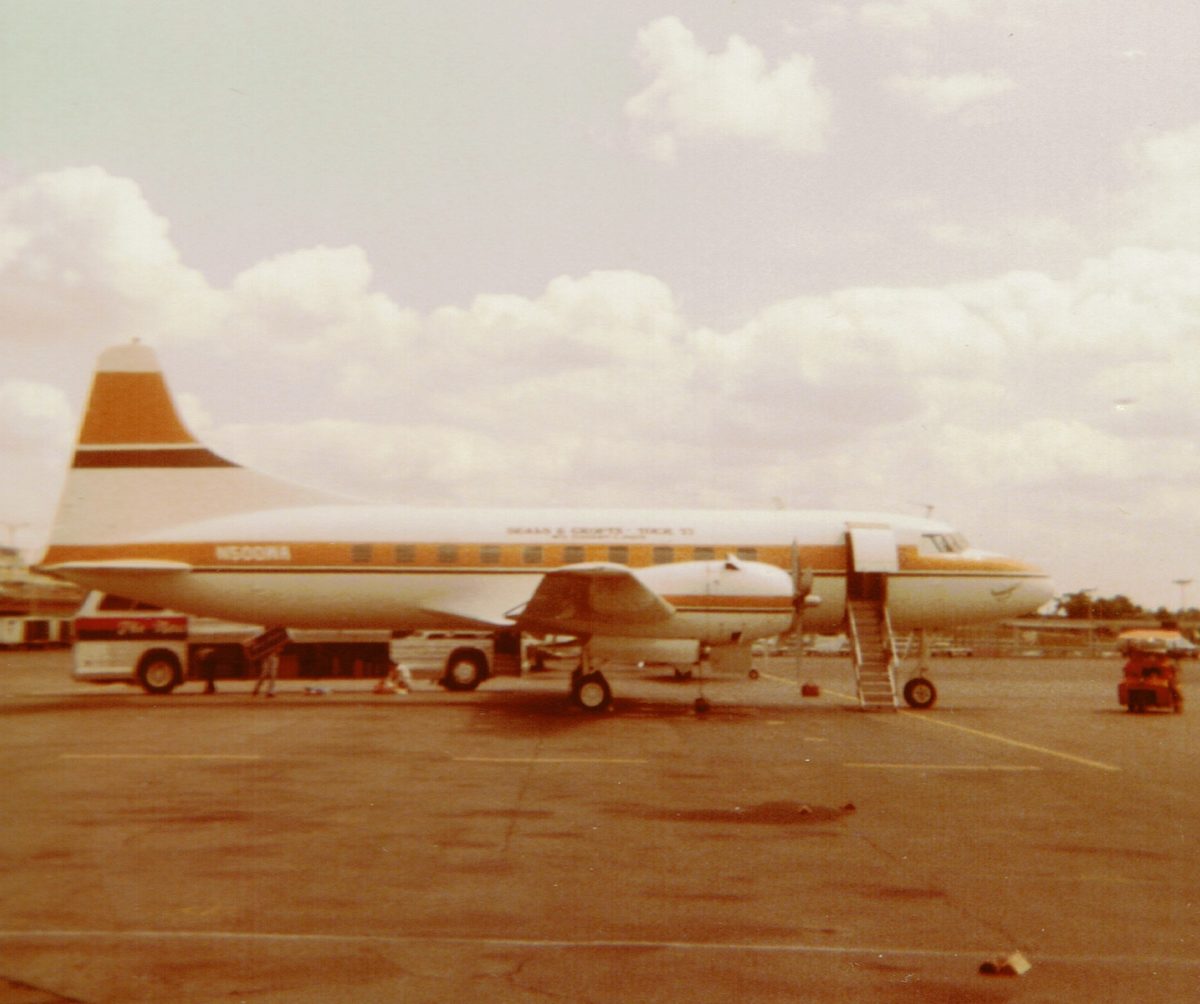 So after the first stint with Seals and Crofts we had a bit of a break and they were gearing up for the next summer tour. I got the call and was told that the rest of the guys were not up for going back on the road so we needed to find a new band. I’m not exactly sure how it all came about, the bass player Domenic Genova and I had worked together before and I assume we put the band together with Ron Krasinski on drums and Steve Olitsky on keyboards. They also added a multi-instrumentalist that used to do gigs with my dad! Bob Young.

Fortunately I took a few snaps of this motley crew. That’s what the road will do for you. Here is the band from my photo album. Ron Krasinski at the gig and Steve Olitsky on the plane “Thunderfoot”.

Dash Crofts in his hotel room with what appears to be a birthday cake, and Jimmy Seals at sound check.

I would not do justice to this process without sharing some photos of the crew.

1. Monitor mixer Ron Quillen with house mixer Robert “Gonzo” Gonzales. 2. Lighting director Armondo, who at sound check would sing a mean version of “The Most Beautiful Girl In The World”, Ron Quillen and the piano tuner Mike Riffel.

1. Misc band and crew members stuffed into some transportation vehicle. 2. Myself and my good friend Doug Sclar.

And finally the late Al Wilson our beloved road manager. We had a day off in Lenox MA the day Elvis died. Al was nearly inconsolable. Just a wonderful guy. RIP Al Wilson Just some of the great crew who made it all happen.

On September 2nd 1977 the best thing that ever happened to me happened. We had finished the “summer” tour and in lieu of a tour bonus which S&C always gave us they asked the band if a week off in Hawaii with two shows at the end of the week and a full weeks pay would be cool. We were all onboard with that! On the second day on O’AHU I discovered this pub called the Rose and Crown, just a great place and I went there every off night. One of the nights this beautiful girl walked in.

We were married on August 30th 1981, spent our honeymoon on O’AHU, and are still together. I am one lucky guy. Love you Libby Hosford!

There were great moments on tour which involved playing shows, of course meeting Libby and some horrific ones which involved the plane “Thunderfoot”. This one was my final Thunderfoot ride and the last straw.

In October we did another string of dates. On October 19th 1977 we played a gig at Purdue University in Lafayette Indiana and the next date was the 21st in Phoenix AZ. After the Purdue show we boarded the plane for an all nighter flying to Phoenix. The keyboard player Steve brought a big bottle of tequila onboard and I think there might have been a few (ahem) other things on the plane as well.

Anyway we take off and the party is on!!! On the plane was just the band. Jimmy, Dash and management were not with us, woo hoo! After being in the air awhile we all fall asleep. I wake up, the sun is shining and we are landing. I make my way up to the cockpit and say to Pete the Pilot, “So we’re landing in Phoenix, cool” He says “No we are landing in Dallas, and we have actually landed three times already to “re-oil” the plane, (remember we were flying the “Oily Skies”) and he says “you slept through it all” (Thank GOD!). Apparently what happened was the plane popped an oil seal at 14,000 feet, smoke starts filling the cabin, Steve Olitsky runs up to Pete and tells him what’s going on. Pete comes back, takes a look and then nosedives the plane from 14,000 feet to 6,000 feet so he can turn the air pressure system off. We land in Dallas and make our way to a hotel.

We are checking in and the people at the desk don’t know us but see who we are and ask us if we are musicians, we say yes and they say this.

Did you hear about Lynyrd Skynyrd last night?

The Lynyrd Skynyrd plane went down that same night, and it was the same make of plane……a 1952 Convair.

I went to my room and booked myself on United for the rest of the tour.

Here is Thunderfoot with “Seals and Crofts Tour 77” on the side. Here is the Lynyrd Skynyrd plane. I did a few more live dates with Seals and Crofts and that was it for me. The last work we did together was actually some legit record dates. The first one was for a movie called “One on One”. The song was called “My Fair Share”, it was the last thing they wrote for the film and Seals and Crofts producer Louie Shelton was kind enough to call me for the record date. The second and last recording I did with them was for their 1978 album release “Takin’ It Easy”, it was the title track and first single. On guitars according to the credits are myself, producer Louie Shelton and Tony Peluso. I did the double tracked rhythm part, there are two solos, Louis did one and Tony the other. Here is the youtube link

That was the end of my working for Seals and Crofts. They were wonderful guys, management always treated me well. They called me for the 78 summer tour but at this point I had decided that I was not going on the road again. I was going to focus solely on trying to get a studio career going. My good friend Scott Page who I knew from the LA Valley College days had a really good band that was playing at a restaurant/club in Toluca Lake CA called The Smoke House. I recommended Scott to S&C’s manager Marcia Day.

I hung up the phone and immediately called Scott and said this: “Scott I turned down the Seals and Crofts summer tour, I recommended you and your band, now I’ve to to tell you about………THE PLANE!

Thanks for reading! Next week more demos are coming my way including the demo of the Earth Wind and Fire hit, “Boogie Wonderland”. Also starting to make inroads into “A” list sessions and my session with the one and only Frank Sinatra!