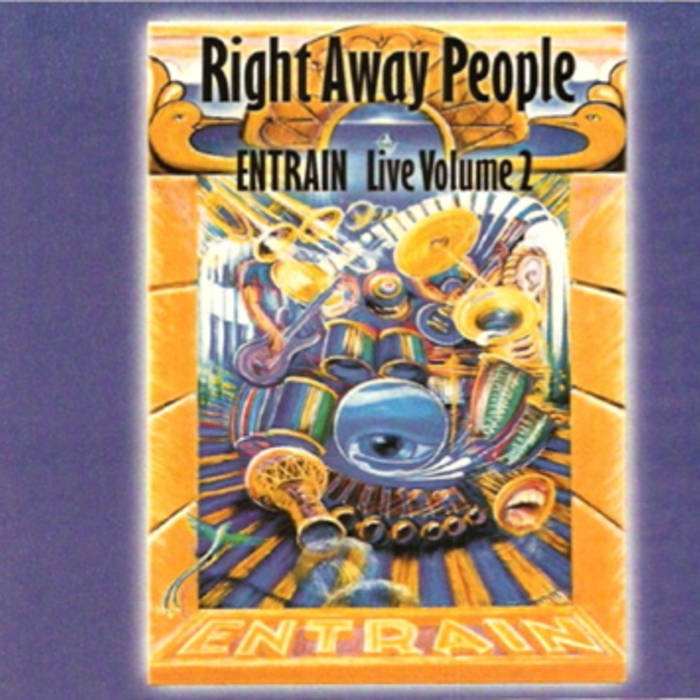 
As my out of town session world was winding down and while I had somewhat gotten integrated into the Boston music scene, I get a phone call from drummer Tom Major. Tom has a band called “Entrain”. They are musically very unique and quite popular in the New England area. He is looking for a new lead singer/guitar player to front the band. My buddy, drummer Larry Finn, who had also played in “Peanut” recommended me to Tom. PF&J was pretty much over and I tell Tom that while it sounds interesting and I would be interested as a guitarist, I don’t see myself as a vocalist and front man. Tom says thanks and his search continues.


A few months go by and Tom calls again. He tells me his new keyboard player Alex Howland has taken over the lead vocals and front man thing but they need a guitar player. I’m down with that. I had not been playing live much and this was a really good band. I’ll never forget the first gig. No rehearsal. Tom sends me the Entrain albums, tells me what tunes to learn, I write some charts on the tunes and just go to the gig and play. Incredible band.


I am gigging a lot with Entrain and I learn a bit of the history. They had been around for quite a few years, had been through some personnel changes over those years and had a really big following. The gigs were in fairly large venues, the crowds were big and into it. Entrain played their own brand of Ska/Reggae/Funk. As soon as Tom would count off the first song, beat one, the crowd is dancing. The dance would continue from the first song to the last of the night. Really great fun. On March 13th 2003 we head to Fairhaven MA to record a live album at a club there. Most of what was recorded wound up being somewhat unuseable but there was one song that turned out pretty good called “House On The Hill”. This one was one of my big spots, lots of solo stuff and the harmony backing vocal part. I asked Tom for the audio files, took it home to my studio, did a bit of tweeking and enlisted a great enghineer I had been using on production projects, Huck Bennert, to mix it. It appeared on the Entrain album “Right Away People”. Here it is on the tube:

When I joined the band there were the following members. Tom Major drums, Lenny Bradford bass, Alex Howland keys and lead vocals, Sam Holmstock trombone and choreography, Klem Klimek sax. As I said all really good players. I started with them in October of 2002 playing shows all over New England. Lots of long drives but the music made it all worth it. They had just finished their busy summer season in which they toured all over the country. I heard the stories, some of them real travel doozies I must say. Most of them involved the (ahem) “beloved” Winnebago. The “Winnie” was the band bus. There were many horror stories of it breaking down on the way to shows. After a few months of gigs, and before entering the dreaded New England winter I told Tom that once the summer hit I would not be available. He needed to find a replacement for me on the 2003 summer “tour”.


Even though my status as a session musician in LA and Tyler TX was looking a bit bleak I just could not see myself on the Winnie driving around the country. I did however feel that to become a “legit” Entrain member one had to do at least one Winnie road trip. Early on, playing the shows in ’02 so far, all of the gigs we did I just drove to. After being in the band for only a few months, Tom told me he was planning a run on November 22nd from Massachusetts to Pennsylvania. One show in Philly on the 22nd and then a show in Pittsburgh on the 23rd. I told him that I was in. This was my opportunity to become a part of Entrain history with a trip on the Winnie. YO!


Manned with my video cam I head out on to meet the boys at 9am. I thought I would share some of these moments with you all. Here we are starting out, it was not long before guess what? I won’t spoil the story but yes it does have to do with travel interruption. 🙂

We get to Philly and play the show. Here is some footage of one of Tom’s drum solos and a real Spinal Tap moment…….trying to find the hotel room at 4AM.

And finally we get to play the Pittsburgh show. Here is a compilation of small bits of the songs “Snake Oil”, “Can’t Let It Go” and “Uncle Jolly”. Pretty Lo-Res but fun stuff

We finish the night, its around 2AM, we are all packed up and and I ask Tom where the hotel is.


But as I said prior, the music made it all worth it. 🙂


As the summer of 2003 approached I had a thought. I had met quite a few musicians around the Boston area, and it seemed that all of the really good ones had some kind of involvement with the Berklee College of Music. I planned on contacting Berklee to see about procuring a position there and started to put a portfolio together. Knowing that some of my good musician friends in Los Angeles were alumni, I asked for letters of recommendation. Graciously Abe Laboriel, John Robinson and Michael Thompson all wrote me letters. I then looked up the dept chair of the ensemble dept., Ron Savage. Of all of the teaching positions at Berklee, I thought working with bands in real time played to my skill set. I cold emailed Ron and he wrote me back saying in fact there might be something available in the fall of 2003.


I was getting ready to contact Ron when I received a call from my engineer buddy Huck Bennert. Huck and I had worked on lots of things together over the years including the Entrain song and I had told him that I was thinking of getting an interview with Ron for the the Berklee gig.


The phone rings and Huck says, “Hey Marty, I am in the studio with Mark Shilanski who teaches at Berklee. Mark tells me that classes have started and the ensemble dept is looking for teachers to cover some classes. I know that you had contacted them and thought you should know about this”.


I hang up, get Ron Savage’s number and call. Ron asks me if I can come in for an interview the next morning! I tell him I can make that. I show up with my portfolio which has my list of credits, some newspaper articles from the Supertramp and Fogerty tours, and the letters from my LA comrades. Ron says it all looks good, that he has a few more interviews and will call me. The next day he calls and asks me to come in so he can show me around the place and sign a contract. On Friday September 26th 2003 I taught my first two classes. I’ll never forget it. I am sitting with my guitar in a rhythm section with three other ensemble teachers, Larry Finn, Danny Morris and Russell Hoffmann. We have this huge group of student rhythm section players and these guys are chatting away to them about this music we are going to teach them. I am a complete fish out of water. Used to ‘winging it” I somehow make it through that first day. With the help of Nancy Marshall who mentored me, I get through the first few weeks.