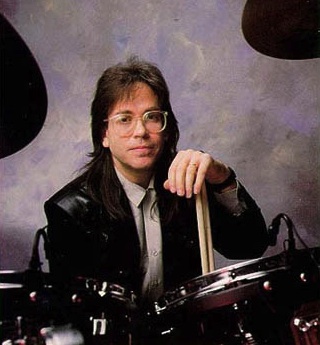 Well, today we are going back in the time machine again. This week I am compelled to tell you my Jeff Porcaro stories. The Porcaro family had moved to Los Angeles in 1968, moving to the San Fernando valley. I was in high school at the time, and had a band with a “manager”. I’m not sure what our “manager” was actually up to but he had rented a building in Burbank on Magnolia Blvd and turned it into a rehearsal space. Ironically it was that same building that Supertramp worked out of in the late 70’s, early 80’s as their rehearsal space and where I would cut the first demos of my band “The Campaign” when it was in Supertramp’s hands. I guess our manager was a visionary!. One day, I am just out of high school mind you, and one of the musicians I knew, Lew Stude, says “Hey, have you heard this drummer Jeff Porcaro? I had not but Lew had and was pretty impressed.

One day our manager Greg says he is having a jam session at the rehearsal space and is inviting Jeff. He invites me and some of my band mates along with others. I don’t recall what we played, but I do recall how special Jeff was, and it wasn’t a flashy chops thing. As those of you who know his work, it was for lack of a better term, a “musical charisma” thing. His groove and overall vibe was just special.

After the hang Jeff pulls me aside and invites me to play with this other group of guys. A few nights later I show up at this space in North Hollywood. It’s a room to play, situated above a doggie bed manufacturing company. At this jam were Jeff, bassist Kerry Morris, and if my memory serves me correctly guitarists Scott Shelley and Steve Edwards. Two excellent guitarists and essentially that was that. I’m busy taking music classes at LA Valley College, and running in different music circles and I suppose we just lost touch. I believe Jeff was doing the Sonny and Cher show at the time. Awhile later I hear he is playing at Donte’s, a Jazz club in No-Ho with the Jack Daugherty band. I went to see the band and Jeff was just as impressive as ever. Shortly after he just took off, like a rocket.

Fast forward to 1978, and the Yvonne Elliman session we did together. This was my big break into the world of legit union sessions. Mike Porcaro was on bass and he and I had done some touring with Seals and Crofts so we knew each other pretty well. I suppose Jeff knew that I was around, working as a guitarist, but this was the first time we are playing together since the doggie bed jam which was nearly a decade before. As I said in a prior installment that Yvonne session launched my “A” team studio career. After that I started to see Jeff frequently as the producers that were calling me were also calling him. Every time you showed up at a session and saw Jeff’s kit you knew the music was going to be special.

There was one particular album we did where something happened that really impresssed me. I’ll explain in the video below. Please forgive the noise in the audio track. I did this and just didn’t have time to sort that out and re-do it. After all I DO have a Monday deadline for all of you! 🙂

Now I have told this story countless times to people, trying to explain what it was like to work with Jeff and they all want to know who the other drummer was. I have never told anyone who it was and never will as that’s not the point. The point is when one played with Jeff one played better and he had a lot to do with it. At least that was my experience. For some reason I just seemed to come up with better ideas, more inspired parts when playing with him. I think a good analogy would be Magic Johnson. Magic was an incredible basketball player but he was a point guard and his job as point was to put others in a better position to succeed. Jeff did exactly that, he just had a way of making the entire band better.

We did a number of sessions in the early 80’s and played on a number of hits together as well. Then in 1989 I get a call to do a record for Contemporary Christian artist, Benny Hester. I had done two records with Benny some years before and had not worked for him in some time, so this was a welcome surprise. I had not seen Jeff in quite a few years as well as I assume TOTO was taking up a lot of his time. I get to the session and there is Jeff, along with Neil Stubenhaus and Aaron Zigman. Tim Heintz was the arranger on the session and had done some pre-production audio files as part of the tracking date as well. The engineer on the session was the late Dave Jahnsen. Dave’s wife Beth had a video camera at the sesssion and was videotaping some “behind the scenes” footage. A few years ago she sends me this video clip!

And then she sends me all of the footage, here is another one. This one is running down the basic track for the song “If You Die Before You Die”, Jeff just smokes this thing. This is one of the first run throughs up to the bridge. At the studio they had video cameras set up to see the band in the tracking room. What you are hearing is the playback in the control room. This was the band just running it down so there is some chatter in the control room as well.

Here is another piece where co-producer Bill Baumgart asks Jeff to play an intro piece that he had done prior. Jeff’s response is hysterical! Then he launches us into the track. When he does the intro fill you can hear the guys laugh in the control room as they are blown away with how cool that fill was!

The gig was booked for two tracking sessions on Feb 15th and 16th of ’89. I remember Jeff really liking what was going down and I believe that he told Benny he wanted to buy the tracks! Hahaha. I arrived on day 2 and was in the tracking room checking my gear, tuning etc. and Jeff walks in and says, “Hey Marty, I just heard this song on the radio by this band Living Colour called “Cult Of Personality”, have you heard it? I tell him I have not. Jeff walks out and 20 minutes later he walks back in and drops a Living Colour cassette on my music stand. He had left the studio, found a record shop and bought the tape for me. What? Who does that? I guess Jeff does. 🙂 I recall one amazing moment on that record. We are cutting one track and we were cutting to a click track as Tim’s pre-production tracks were going to be part of the albums arrangements. We hit the bridge of this particular song and Jeff starts speeding up ever so slightly. Now the click track is a bit behind the band. Of course we are all playing with Jeff, not the click and at bar 8 of the bridge, which is the last bar, he winds up this big drum fill. The thing is that since the band is ahead of the click when Jeff plays this fill he has bought himself some extra time and it gives him the abiliy to “S T R E T C H” that fill out. He plays this really powerful fill and comes down on the downbeat right with the click. BOOM! Simply amazing. Here is the song that leads off that album, “Headlights On The Highway”

After those Benny Hester sessions in ’89 I don’t see Jeff for quite some time then in 1990 I get a call from Michael Omartian’s office booking me. It’s a session for a new artist, Raymone Carter. I had not worked for Michael since 1984 so I was a bit surprised. It turns out that Michael was cutting basic tracks on this record with Jeff, Mike Porcaro and Steve Lukather, but Luke could not make some of the dates. Apparently Jeff caught wind of this and told Michael he should call me. I was blown away. The next thing I know I am getting calls from producers I didn’t even know. I’m showing up on these record dates and there is Jeff. He was recommending me to all kinds of guys. I was always really grateful that he thought enough of my playing to do that. The guy had played with the best of the best, I mean Steve Lukather was his bandmate, and to be thought of in that arena was quite gratifying.

In 1992 I was doing a TV show that Benny Hester was a producer on. The show was called “Roundhouse” which I will get into in a later installment. We were taping the show in Orlando Florida, and on August 5th in the morning my phone rings at my apartment. I answer it, it’s Billy Sherwood. Billy says “Marty, Jeff’s gone.” What? Jeff passed away this morning”. I am sitting there stunned, I couldn’t believe it. Billy didn’t have the details but I guess he knew I would want to know. A few days later I am back in LA at Jeff’s service at Forest Lawn. Just a really sad day. The world lost a real rare talent. Last year we lost his brother Mike. Such a shame that these two were lost in their prime. I have tried over the years to describe to people what it was like to play with Jeff, which is impossible. Awhile ago I ran into an interview with David Paich. It might have been on Inside Musicast. I think he said it best. David said “Jeff played the song like he wrote the song”.

See you all next week. Marty