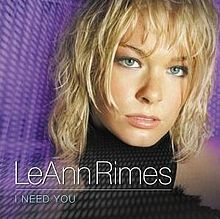 It’s the year 2000. Y2K was a dud, Prince had implored us all to party like it was 1999, so I guess the party is over. My mom’s aunt was wrong when she said that the year 2000 would never be written, of course due to the fact that world was coming to an end before then.

So I guess we are on to more mundane things.


In late ’99 the final sessions were done for the “initial release” of the LeAnn Rimes album “I Need You”. The title track was originally part of the music for the TV mini series “Jesus” which aired in May of 2000. The single was released on July 18th of 2000 and hit big. The song spent 25 weeks on the Billboard Hot 100 charts and peaked at #11. It hit #8 on the Country charts and #2 on the AC charts and was certified Gold by RIAA, my last one. 🙁 But hey, a 21 year run as a session player on hits and still on a record that big ain’t bad. 🙂


The “tracking” sessions on that album ran from Sept 10th through the 13th of ’99. The rhythm section was great, Eddie Bayers on drums, (I can’t say enough about how good Eddie is!) Mike Brignardello on bass, Milo Deering on acoustic guitar and mandolin, myself on electric and acoustic guitars and Randy Fouts on keyboards. There was another engineer/keyboard player involved that was on staff at Rosewood, Austin Deptula.


From WIKI:
I Need You is the third compilation album from American recording artist LeAnn Rimes. The album was first released on January 30, 2001, through Curb Records to help satisfy Rimes’ recording contract obligations during litigation with the label and her management. Rimes publicly disowned the album just days after its release, causing it to be discontinued. The album was then officially released by Rimes on March 26, 2002, with four additional tracks and a new recording: “Light the Fire Within”.


I’m not sure what all the brouhaha was about but I was glad to see it stayed in production and was successful. Here are a few pics from those sessions.
Left to Right: Milo Deering, Gary Leach (partially hidden) Greg Hunt (seated) myself, Mike Brignardello, Mark Tinney, Eddie Bayers, and Wilbur Rimes. Left to Right: Greg Hunt (seated) Gary Leach (facing wall) myself and an unidentified person behind me, and Mike Brignardello. We are all looking left which I assume means we were listening to LeAnn’s father/producer Wilbur. I have a few recollections from working on the title track “I Need You”. I was not sure if I had it all right so I called the arranger on the song Gary Leach, and he filled in the blanks. While we were tracking the basic track on that song with Eddie, Mike, Milo, Randy and myself, Gary stopped us all. He stated that the chords in the chart needed to be improved and told us to take a break. After 20 minutes he comes back with a new chart and an improved sequence of chords. We record the basic and move on.


Once Gary and Greg listened back later, they decided to keep the drums, bass and my intro electric part. They scrapped the piano, acoustic guitar and the rest of my electric part. After they made that decision and added some keyboards, I was brought in to record additional guitars with Gary behind the console. I added the the acoustic guitar part, and now it was time for additional electric guitars. We were working on the intro and Gary had come up with a melody line, which I was playing in octaves but the sound just was not right. I tried various guitars and Gary was looking for something different. He said “Hey, Martin I have this new guitar by Godin, let me get it”. It was a hybrid electric / acoustic unit and we dialed in a sound that worked. Later on, after Austin Deptula had done a lot of work on the track, I was with him in his very small pro tools editing room. The track was essentially done but there was one section that he felt needed something and asked if I had a mandolin, which of course was in the arsenal of stringed instruments. I grabbed it and we added a bit of it to an interlude and the end of the song.


Now came the time to mix. As I said this song was slated to be in the TV movie “Jesus” which had lots of songs by various artists and the “music biz machine” was engaged. The song was brought to the legendary mix engineer Mick Guzauski. Greg sat with Mick and they worked on the mix. Now, mind you, there was a mix that was done already by the Tyler boys, Greg, Gary and Austin, that the three of them knew was really the right mix. But as is standard practice in the biz there are certain people you go to for certain things and Mick was one of the best mix engineers on the planet. After hours of mixing “I Need You”, it apparently just didn’t have the “magic” so to speak and so Mick imported the Tyler mix into his pro tools session. The Tyler mix which Greg and the boys referred to as “the Red Dot mix”, (the CD it was on I guess was marked with a red dot from a sharpie) just had the magic on it. Mick turned to Greg and said, “I can’t do that”, with the emphasis on the word “that”, meaning there was just something about the Red Dot mix that was not going to be beat. Red Dot was the master and that was what was released.


I always thought the album had some great things on it, the title track and others, here are a few of those on youtube.

One Of These Days. On this it’s Milo on acoustic guitar and I did all of the electric work, including one of my favorite solos. (Note the differences in the album cover at the beginning of the blog and this one in the youtube video. The one up top is from the second release of the album, the one in the video is from the original release.)

That was the last recording I did for LeAnn. Good way to get the last gold record I suppose, although there was one last big hit on the horizon, which I will get to in a future installment. Over the next few years I still did work for Greg Hunt and Curb records. Lots of tracks for Steve Holy, Mark Tinney, Mary Griffin and others which I don’t think were ever actually released. The days of working at Rosewood were coming to an end, great times making great music with the best of the best. As I have said before I first met Greg Hunt and Gary Leach in 1985 and had worked with them sporadically. Then in 1996 I was at Rosewood quite regularly until 2003. All of my studio session gear sat in Tyler TX. The calls from LA were winding down and so once I sent my gear from LA to Tyler it just stayed there in Greg’s facility until he called me again. Fortunately my production studio was busy. I was doing producing of local acts, some really good things I will post next week.


And speaking of next week, the incredible story of the loss and return (thank GOD) of my main guitar. This guitar is my “Lucille”. Also, new beginnings. The start of working at the Berklee College of Music in Boston. Next week I start my 14th year there. The blog title may have to be adjusted. Maybe “The Life and Times of a re-invented Studio Musician”. 🙂 …..