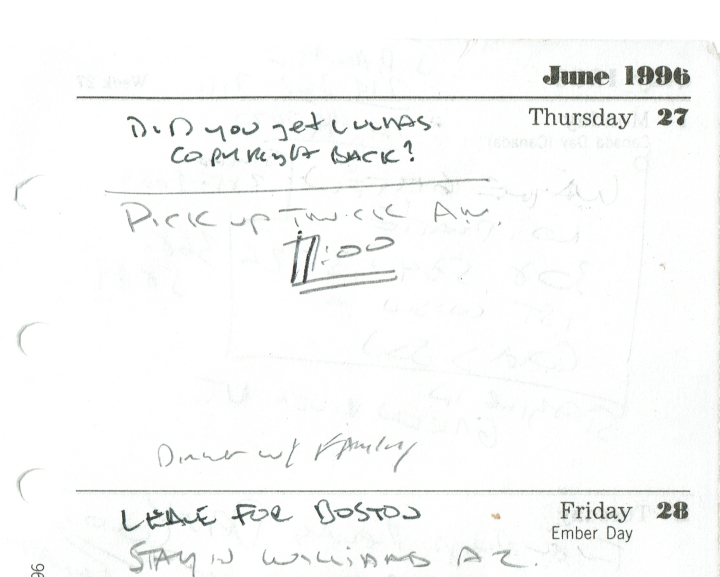 Here is installment #32 of “The Life and Times of a Second Call Studio Musician”. The light at the end of the tunnel is approaching, I am thinking maybe three more installments total as the “major” studio sessions are just about done.

Entering 1995 things are changing pretty dramatically. As I have stated in the last few episodes I can see that the future of record date sessions was somewhat on the wane in LA. I did not have a lot of TV/Film accounts so relying on records only was a bit sketchy. My wife Libby had gone back to work and while she had a great job it was quite a ways from where we lived. She was driving 40 miles one way to work going from the Northeast San Fernando Valley down all the way to Torrance CA. In the early 90’s we actually started discussing making a move from where we were currently living for various reasons, one being getting closer to her work. At one point though, I brought up moving to Massachusetts so that was now on the table as well.

Around 1994 I had started writing music for a company called Transition Music that placed music in film and TV. With the advent of all of the new cable TV channels around, there was a serious amount of music that was necessary to make these new cable shows go. I had a small studio at my house and I would get calls from Transition to write music cues for various TV shows. I would write and record them and then mix to DAT tape and drive the tape down to the office in North Hollywood. Transition started placing quite a few pieces and the residuals on that were pretty good. Shows like Entertainment Tonight, Extra and Access Hollywood were running my cues on a regular basis. Here is one of the more interesting stories regarding that time.

I get a call from my contact at Transition, Doug Stebleton. Doug says this, “Hey Marty, we just got a call from the NBC TV show “ER”, they have the George Thorogood song called Bad To The Bone in the temp track of a scene in the show. The negotiations for the sync fee are not going well (meaning George wanted more than NBC was willing to pay) and they’re wondering if we have something they could use instead. Could you write something like that?” I tell Doug I’ll get right on it.

I sit down and hammer out a drum machine part, lay down bass and guitars, and give the song to Libby to write a lyric and melody. She comes up with this song titled “BAD”. As a vocalist I’m certainly not the right call for this as I don’t have grit in my voice at all. I did remember my buddy Jim Williamson had a band with a great singer in it, Darrel Monson. This guy was about his bluesy as they come. I call up Darrel and he comes over and lays this vocal down.

I run it over to Transition, they immediately take it to NBC and play it for the ER people, who apparently absolutely love it. I get a call from Doug that they love it and are putting it in the show. This is pretty big as it’s going to be a “feature” on network TV so the payday would be really good. A few days go by and I get another phone call from Doug, George has come to his senses and they negotiated an equitable deal between the two of them so his song is back in.

Meanwhile, our song is still in the Transition catalog and one day the people at the Warner Bros Network show “Sister Sister” calls Transition and asks if they have a song like “Bad To The Bone!” They run our song over to Warner Bros., and it gets placed in Sister Sister. Here it is if you care to listen.

The Transition music gig was good and really is one of the reasons I didn’t feel I needed to be in LA. I had the relationship, so instead of driving a DAT tape to them I could just use Fedex. I continued to write TV/Movie library music for years at my studio in my new town for them.

There was another very interesting thing that happened around this time which would turn out to be pretty fortuitous. The music I spoke about a few episodes ago that I had written with Billy Sherwood was completed. Billy and I ran it to our “manager” who told us he thought it wasn’t current enough and so basically we were sitting with an album in the can and no one to shop it to the labels. While it’s sitting on the shelf Billy had gotten back together with his former band “World Trade”. They had a great record that was released in 1989 and had been working on “World Trade II”.

There was one song from the writing/recording sessions I did with Billy that he really liked called “Euphoria”. One day Billy calls me up and asks me if he could put Euphoria on this new World Trade release as they had a label that was going to put out their album. They were not going to re-recorded it. Billy was just going to use our recording and put it on that record. It turns out to be the title track! 🙂
Here it is.

More on that and why it was fortuitous next week!

After much soul-searching and discussion Libby and I decide to take a shot at moving back east. In terms of my career, I had done a lot of research about the move and thought that maybe I could move outside of Boston and open a small “project studio” catering to outside clients. I never did open up my studio in Los Angeles for outside projects, I always used it strictly for music I was working on for myself. We sold the house, packed up the truck with the help of Michael Jochum and some other friends, and drove out of LA, July of 1996.

I did not tell anyone in LA that I was moving. I left all of my recording session gear with my cartage company, kept our home phone number and put it on voicemail only. Once we were settled in Massachusetts I would call my voicemail everyday and check to see if anybody needed me for sessions. If it was a call for a jingle or a lower budget project I would just say I was busy. If it was for an album with days of tracking and overdubs I would take the session, fly in and do the work and then fly back home. It was pretty crazy really but it seemed to work. I remember being on a session in LA about six months removed when one of the guys in the session said to me “I heard you moved”, I completely denied it, hahahaha, just saying “Hey I’m here aren’t I?

Here are pics of my datebook leaving, coming back to work and going back to MA.

Six weeks later I am flying back to LA. I did sessions for Hal Sacks, then flew to Seattle to work with Roby Duke, back to LA for more work with Hal, then sessions for Bobby Bruce and Freebo! (Told you I’m still in LA 🙂 ) Returning home on the 15th. Cake.

Well, that’s it for today. Next week the release of the album “The Key” with Billy Sherwood, and playing on one of my all time favorite records, Michael Ruff’s “Lovesongs and Lullabies”