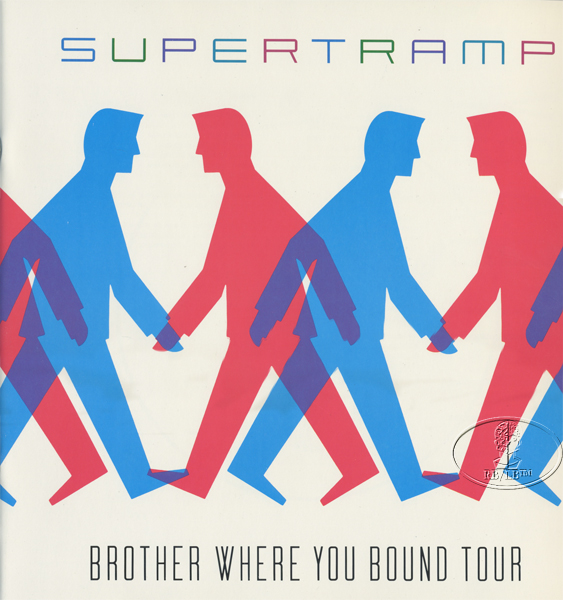 With the Supertramp album “Brother Where You Bound” wrapped up they asked myself and my old friend Scott Page if we would go to Europe with them on a “promo” tour. On June 6th of ’85 we left to do two weeks radio/tv promo. I had never been to Europe before so this was certainly a cool way to see it. Very first class, great hotels, crazy good food, the whole bit. Quite nice. Here are a few snaps I took of that scene.

Rick, John and Dougie with fans Scott Page “hitchhiking” to the gig. Myself and Scott Page The man who got me the gig Bob Siebenberg. Thanks Bob! Scott had toured with Supertramp on their previous tour so he was onboard for the new “Brother” tour as well. They asked me to do it, then Rick and the boys went about auditioning an additional guitarist. The song “Brother Where You Bound” featured a great solo by David Gilmour. They wanted to find someone who had great solo chops to cover that bit and others. They auditioned a lot of excellent guitar players including Buzz Feiten and my pal from the A&M demo days Kenny Lee Lewis. Eventually they settled on Carl Verheyen.

Rehearsals started in September of 85 and the tour ran from October through November, then picked back up in January through March. At this point in my career having two bands get close to signing deals, I wasn’t sure if it would ever happen. I thought if there was ever a time to go back on the road on an “extensive” tour it would be with these guys. They were huge at the time and I knew it was a great oppportunity so I decided the risk of leaving the LA studio scene was worth it. One odd thing did happen at rehearsals though. Rick pulled me aside and very gently explained that I was to be the “rhythm” guitarist. Carl would be handling all of the “lead” solo work on ALL! of the songs. 🙁 I very politely told Rick that if that was indeed the case I was no longer interested in the tour. Thanks but no thanks. He immediatly reversed the situation and split the solos down the middle. 🙂 I was certainly known for my rhythm guitar skills as that’s what it takes to be a successful studio guitar player, but to go on the road as a rhythm guitarist exclusively, Nuh-uh, no thank you. This was damage control. If the word gets out that my gig was strictly rhythm guitar the gig opportunities decrease exponentially. Sometimes you just have to take a stand in this biz and that was one time I felt I had to be willing to walk.

So the new band guys known as the FNG’s were myself, Scott, Carl, keyboardist/vocalist Mark Hart and saxophonist Brad Cole. Off we went! Starting in Newfoundland, and hitting all of the main Canadian and American cities. Then in January heading to Europe. Here is the European tour schedule. Note the Phil Lynott “Nineteen” mention up top. That was Phil’s new single I wanted to pick up. Scott Gorham had told me about it at rehearsals in London before the tour dates. Our first date was January 6th. Phil passed away January 4th. We were all just stunned. On the 8th and 10th we played the Royal Albert Hall. On March 8th 1986 I met this woman and her husband. Woah!! I was absolutely stunned at how incredibly beautiful she was. The tour was a ball, and the music was great. Here are a few more snaps of that time.

The Supertramp Members at sound check.
Rick Davies with Scott Page in the back snoozing! Here is Bob and Dougie with tour manager Richard Ames. And of course us FNG’s.
Mark Hart And Carl Verheyen Yours truly on backing vocals at a show. And center stage for a solo. After 3 months touring Europe it’s nice to be back home with Libby and Ian! Next up more sessions and the John Fogerty comback tour!