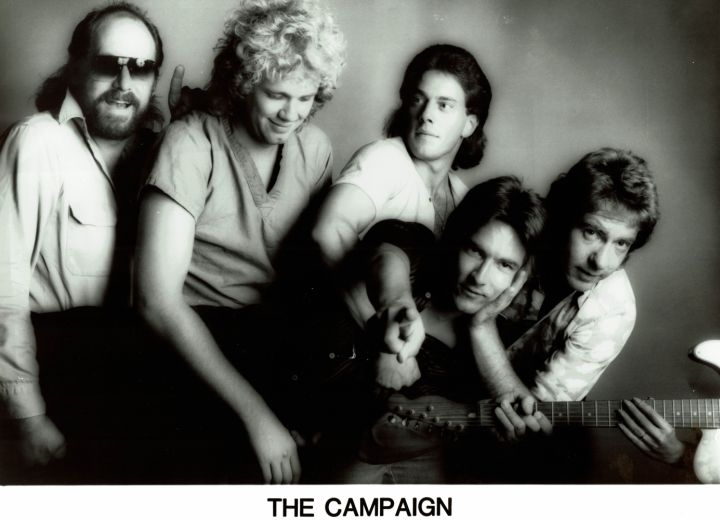 So in this installment I’m going to backtrack a little bit. While I was doing a lot of sessions and that was going really well, the goal was still to try to get a recording contract for my band The Campaign. Toto had hit big and there were other session players that had bands that were getting signed. Robbie Buchanan’s band Maxus had signed a deal, and a lot of other session players were pursuing this goal. Eventually my guitar buddies Michael Thompson and Dann Huff had bands that were signed. Jay Graydon and David Foster did an album under the band name “Airplay”. That was the goal, get signed, have hits and tour. Some guys were just so busy with sessions that idea became less important. Robbie Buchanan was one that was just immersed in session work. From Robbie’s website:

“In 1980, we formed the Maxus band with Jay Gruska, Mark Leonard, Doane Perry and finally, after several different guitar players, Mike Landau. I loved playing with the band but, because my personal career was doing so well as a session player, I didn’t want to end up having a hit and playing it on the road for the next ten years, so, I left. Jay, too, had many other things “on the fire.” Still, it was a blast playing with guys that played that well every day on our own songs. Studio guys are that way too, but you’re usually playing someone else’s songs. Depending on the session, that can be good or bad.”

I love that last line as there were certainly albums that I had played on that the producer requested parts that I thought were fairly lame. A few times I actually considered asking the producer to leave my name off the album credits! Hahaha
The Campaign had recorded demos at Supertramp’s demo studio, which nothing much came out of so we wrote more tunes and went to a studio in the valley owned by Frank Jones. Some pics from those sessions. Myself and engineer Steve Mitchell. That’s my ’59 esquire that I had Mike McGuire install ’70 mini humbuckers in, and my strobe tuner Jay Graydon told me to buy is sitting on the console. I still have both and use them all the time. We cut the tracks with Steve Mitchell at Frank’s place and then continued doing overdubs at Reggie Fisher’s studio, and we mixed with Reggie. We shopped those tracks and came away without a bite, again, so we decided to take a different course of action. I was writing the songs with my writing partner Dennis O’Donnell. They were not guitar driven so much as I was writing the music on piano. Dennis was writing most of the lyrics and we kind of 50/50/’D the melodies. TOTO had set the bar for the “LA studio musicians turned rock band” with the hit “Hold The Line”. I think a lot of guys followed suit stylistically but we were trying to do something different. Find our own voice so to speak. The influences of the band members were all over the map, Springsteen, The Talking Heads, Steely Dan, Todd Rundgren. I’m playing my Esquire on the tracks, designed for lots of “chords” that were a big part of the Campaign sound. Not many “power chords” on our tunes.

The problem we had which was a mistake I made with all of the bands that I had was we just spent months in the studio cutting demos and didn’t play live at all. In retrospect it would have been good to play lots of shows, get a fanbase going. We did play one very memorable gig at the Ice House in Pasadena. We were opening up for a band fronted by a very in demand session cat. I don’t want to throw anybody under the bus here but our set just SMOKED. When we finished our bass player Kerry Morris was walking by the “green room” backstage and this guy was pissed. Kerry heard him say, “We just got blown off the stage by those guys!”

I guess we thought that we needed material first and foremost but we made really extensive demos instead of just sketching things out. Oh well, lesson learned. Ultimately I had two bands that got the “record deal” call, lawyers got talking and then things blew up……both times. The first of these was a scaled down version of The Campaign. As I said the Campaign’s songs were written by myself and Dennis O’Donnell. Derek Bergmann was starting to write some good things as well so the three of us recorded some new songs to shop to a new Motown label called Morocco Records. I had recently done a Paul Anka record with Vinnie Colaiuta on drums. This was the second time I had played with Vinnie and this particular session we really locked in on some tracks. He sounded amazing and I told him about these demos we were cutting at my house and asked if he would come and play on them. Gary Ferguson must have been on the road. Vinnie came over and played on this small Slingerland kit I had bought from Ralph Humphrey a few years before. At my house I just had a 4 track Sony tape machine and not much else. I put up a few SM57 mics and Vinnie had at it. Here is one of those tracks I duped off from a cassette. Sonically challenged for sure but I always loved this song and Vinnie just killed it.

Morocco was Motown’s new rock label venture and it was headed up by Steve Barri who I was doing sessions for. I did rough mixes and dropped them off to Steve’s assistant, Gail Pierson. The label was going to sign 10 acts, one of them my brother was writing songs for called Kidd Glove, Paul Sabu’s band. They had 9 bands signed when I dropped off our tape and then I get the call from Steve’s office, he loves the demos, and our lawyer begins negotiations for the deal. Things are moving along when apparently the brilliant songwriter, arranger and producer from Austria, Peter Wolf, who had hits with Jefferson Starship and others, bumped us. I guess he submitted some stuff and Steve could not turn it down. His band “Wolf and Wolf” was with his wife Ida Wolf and was the 10th act signed by Morocco. I knew of Peter and when the album came out I picked up a copy. It was just really quite good. I could see why we got bumped! Ultimately though he label flopped and shut down.

The Paul Anka record I referenced was a great record. Michael McDonald and David Foster were heavily involved in the writing of the songs. This was another Who’s Who of LA session players. Recorded in ’82 it was released in ’83. The track arrangements were done by the best of the best, my old friend Bill Cuomo, David and Michael, Jay Graydon, Paul and the producer Denny Diante. I believe the first thing we cut on that record was the title track “Walk A Fine Line”. The credits are as follows, Vinnie Colaiuta drums, Nathan East and Lee Sklar bass, Marty Walsh guitar, Michael McDonald and Bill Cuomo Keyboards, Paulinho da Costa percussion, Michael McDonald background vocals. Vinnie was playing this infectious groove and the chart was pretty wide open for interpretation. I jumped on this guitar part and it just really locked with what Vinnie was playing. I contacted producer Denny Diante him a few weeks ago regarding this track and he sent me the following:

Marty…thinking about your comment that your gtr part was way out in front on the “Walk a Fine Line” track. I started to think about that and the old gray cells started working…here’s what I remember. ..I came in early at Sunset Sound B and the second engr. had the tape up. Larry Hirsch the mixer wasn’t there yet so I started listening to the track alone. I brought up Vinnie C. on drums first…then Sklar and East on bass…then you and then Cuomo on keys…I left those levels as they were and when everyone arrived they just said…”that’s the shit”…don’t touch anything…in essence…it’s the part you came up with that lead the way…a locked groove was there and it never changed…with Hey doing the horns and Lubbock doing the strings and McDonald on keys and BG’s…doneski!!!! I thank you for your creative genius in nailing the track direction…you lead the way..I had the easy part..I didn’t fuck it up!!!!…dd

When the album came out Denny sent me a copy with this note: When I got the album I was really a bit stunned that my guitar on this track was so out front. On AC/Pop records the guitar is usually subservient to keyboard parts. I really do owe Denny a debt of gratitude for going in early and putting this mix up. Here is the youtube link to that track.

That’s it for this week, next week more ’83 sessions including the solo that I guess I am most remembered for, Donna Summer’s “She Works Hard For The Money”.