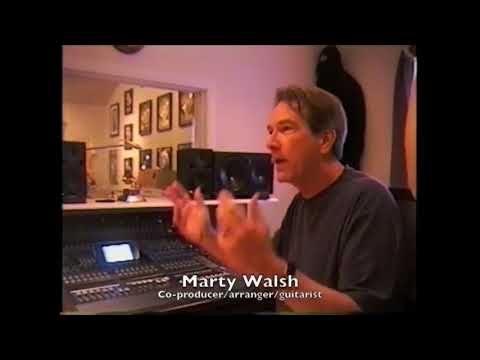 
In the last episode we looked at the first three songs on my 2014 release. “The Total Plan”. Here are the stories of the next three tunes. If you are interested in the album it can be found here:
http://store.cdbaby.com/cd/martywalsh


Track # 4 is called “Fuel”. The rhythm section is Tom Major on Drums, Danny Morris on Bass, my son Ian Walsh on Keyboards and Paul Jefferson on Tenor Sax. As I mentioned in the last installment about the album, the songs included were all bits and pieces of prior projects. This one originally was a song earmarked for an album by Canadian songwriter/singer Dean McTaggart. I had gotten to know Dean after contacting him about writing some things with John “JR” Robinson for another project. After we had written a few things together Dean told me of this solo project he was working on. He wanted me to give him some music bed ideas. I sat down with my son Ian and carved out a few things. One of them stuck. That one is called “How Cool Is That” which appears on Dean’s album “Shed My Sin”, and one didn’t stick so I took the idea and used it for my album.


This one I wanted to use my Boston musician friends on. I had played in Tom Major’s band “Entrain”, and had worked extensively with Danny Morris who grew up playing music with Tom. I needed a sax solo on this so I enlisted a former Berklee student I had worked with, Paul Jefferson. A special thanks goes out to John Escobar for recording Danny and Paul.

The 5th song is titled “Coast to Coast” and for good reason.


A few years before I had produced a track for a local singer/songwriter, Steve Kercher. The song was called ” A Friend of Africa”. When I met with Steve he inquired about using the legendary Abe Laboriel on Bass and Abe’s son Abe Jr on Drums. I made the calls and we hit on 50%. Abe Sr was available but Abe Jr was just not. I believe he was heading out on the road to work with McCartney. I told Steve that we should call my good friend JR. I did and we booked a session at JR’s home studio to record the tracks. Steve and I flew to LA, did the session, and while there Steve took some video footage. Here is a snippet of us in the studio.

A few years later while working on this new album idea I knew I had to have Abe Laboriel on my album. I had worked with Abe over the years and it seemed fitting that he somehow be included. I remembered this song, knew that Abe and JR both ripped on that track. I called Steve and asked if it would be ok if I did some edits on his song for a new instrumental version. He agreed so I called Abe for clearance to use his parts, Abe agreed and to work I went. So far I had John’s drums, Abe’s bass, Steve’s acoustic guitar and some production synth parts I had written for “A Friend of Africa”. Right away I thought that it had to be an all LA band. I immediately called my old friend Bill Cuomo who I have worked with since the demo days of the mid 70’s, and did many records with after that. Bill was now living near Nashville, had a project he was working on, and we worked out a barter deal. My guitar tracks on a song he was producing in exchange for keyboards on “Coast to Coast”.


When Bill sent me his tracks I was totally blown away. Vintage Cuomo. His piano part in the front of Coast to Coast is just exquisite. Then later his 8th note sequence and string parts were the perfect backdrop to my guitar solo. After working on my solo for some time I just thought the song needed more variation. Since the all LA band thing was something I wanted to pursue, and I decided thie song needed a tenor sax player, there was only one player to call.


Gary is a great sax player and we both played on probably the most recognisable of hits I had played on in my career, “She Works Hard For The Money”. It turned out I was already heading to LA soon so I called Gary, booked him and started looking for a studio to record the tenor sax at. Seeing as how the personnel of this album was turning out to be so many people that I had worked with in my career, I called my musical mentor Jay Graydon and asked if he would record this. Jay was in as well! I flew to LA, Gary and I showed up at Jay’s studio and cut the tenor tracks. It was a laugh riot! Those two were telling stories of days past, I was in tears laughing, just too much fun. The final piece to the puzzle was adding the wonderful Trumpet player Darren Barrett who I knew from Berklee. Darren was not from LA but he was the total right player to round out the call and response solos between myself, he and Gary. Here is the song “Coast To Coast”.

Finally the 6th track is one that is near and dear to my heart. When my son Ian was in his last year in high school he was part of the music program. His teacher asked Ian to ask me if we could play something together at the final high school concert. I agreed and suggested to Ian that we should try to write something together. We sat down and wrote this instrumental song, performed it at the show and there was not a dry eye in the place. Since I was working on this album I thought that song would be a nice one to include. We sat down and revisited the song, recorded the piano and guitar tracks to a simple drum loop and I built the rest from there.


I contacted Lincoln Schleifer who lives in New York to play Bass and enlisted a former Berklee student Dan Graham to play Drums. Both great players who dug right into the sensitivity of this song. Now I had Ian on two tracks on my album but what about my son Eric? Ahhh, I had big plans for him as well, I will get into that in the next and last installment of “The Total Plan”. At this point all I needed was a title for this track and I remmbered a lyric I had in my head for some time that I was thinking of using for a vocal piece, “Inside The Rain”. It had a nice somewhat melenchioly feel to it which this music fit perfectly. Here is “Inside The Rain”.

Next week the last four songs of “The Total Plan”.